Displacement from one's own home after a natural disaster: who are the most vulnerable to psychological distress?

When the Earth stops shaking, the survivors begin their journey back to lost normality. This blog will present an analysis focused on the post-earthquake emergency phase's psychological implications in the elderly, adolescents, and children populations. 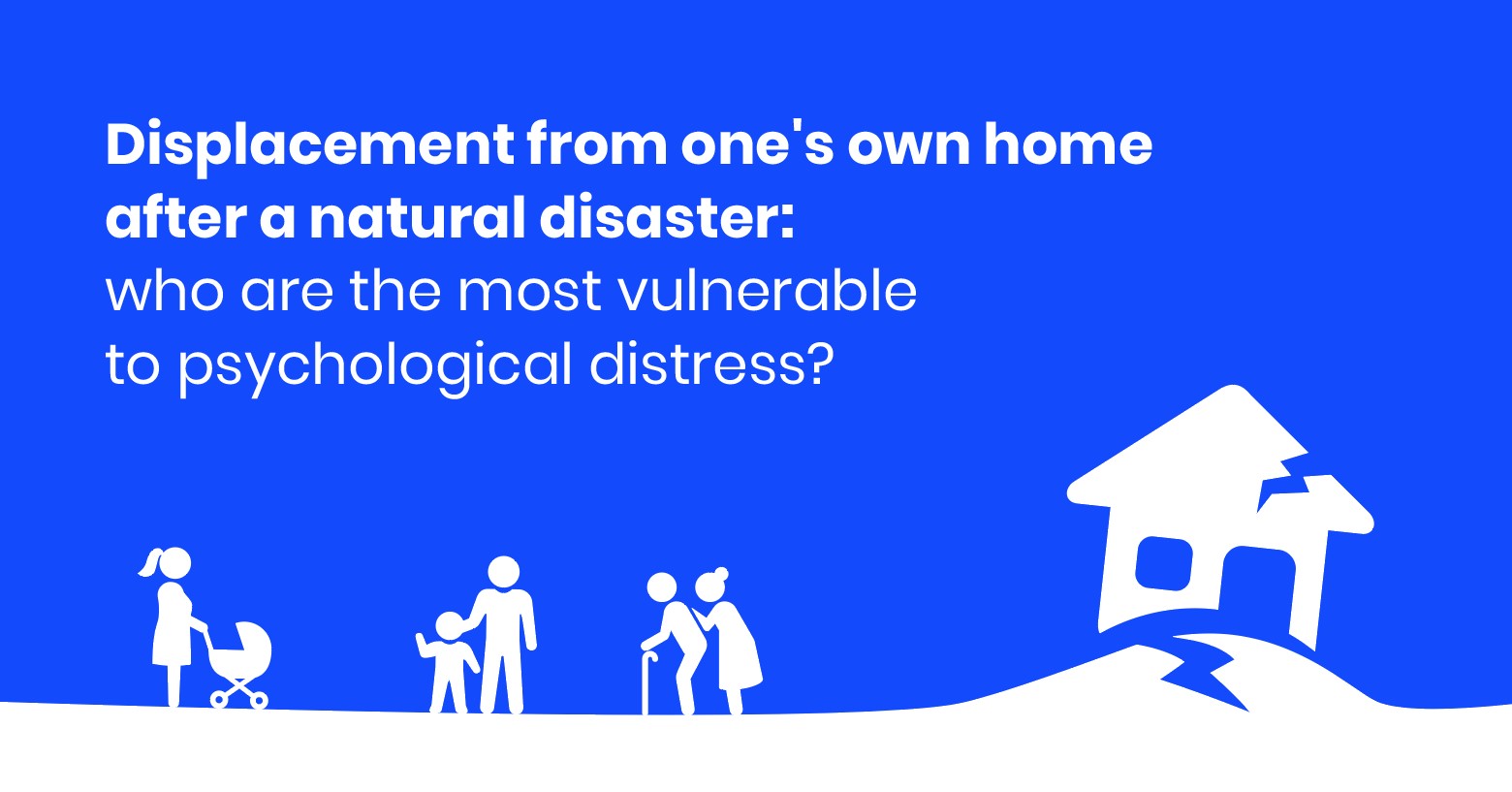 When the Earth stops shaking, the survivors begin their journey back to lost normality. In this journey, thousands of displaced people, removed from their homes, their affections, habits, routines, and points of reference, seek a new balance. In this moment of crisis, the individual is more exposed, becoming more fragile, vulnerable, and disoriented; Thanks to their resilience capabilities, people head towards a form of renovated normality, reconnecting networks of support and help, recreating new habits and routines, building new points of references, previously disrupted, and re-stating their everyday activities, primarily work and school.

However, this disruption and reconstruction process might be experienced differently from one individual to another, leaving some individuals more exposed to dangers than others. It is essential to understand

This blog will present an analysis focused on the post-earthquake emergency phase's psychological implications in the elderly, adolescents, and children populations.

What happens after an earthquake? Focus on the displacement process

After an earthquake, some people are forced to leave their damaged or destroyed homes. In the beginning, displaced people find hospitality in tent camps, hotels, or relatives' homes.

How many people? To give an idea of the numbers, for instance, the earthquake in central Italy in 2009, that hit, among others, the ancient historic city of L'Aquila, caused the instant displacement of 67,000 residents, both in the city and the surroundings (Dolce & Di Bucci, 2018). Some years after, in 2012, another earthquake in northeast Italy forced 45,000[1] citizens to leave their homes. Four years later, in 2016, another earthquake in central Italy displaced 49,844 citizens[2].

For how much time? Displacement duration can vary a lot. It lasts only some weeks for some people, but other citizens might stay away from their homes for years. When we are writing this blog, some of the citizens mentioned above are still displaced, and they probably will never return to their old homes.

The non-voluntary separation from one's home is a stressful event. The change of home is a stressful event, even in regular times. However, after a disaster, it is worsened by the non-voluntarily of the act (it is imposed by necessity), the personal trauma (the event itself induced stress), the environment (we see destruction and suffering around us), and the social experience with the event (we have perhaps even lost a loved one of our own). In the case of an earthquake, the forced rupture is due to building non-habitability first and building reparation later. In these circumstances, temporary relocation in a foreign context is needed, and the social network's disintegration is one of the possible worst consequences (Chen et al., 2001).

Why is moving away from home and neighborhood stressful? The home and the neighborhood in which the individual grows up are incorporated into the core affective component of one's identity; they represent the background of many meaningful relationships and become each individual's personal history. Defending one's own spaces and familiar places is the same as defending one's own identity (Low & Altman, 1992; Proshansky et al., 1983). Owning a house, therefore, provides a profound meaning to one's need for self-protection. John Bowlby, a British psychologist notable for his interest in child development, highlighted how children have the basic need to form an attachment bond with a caregiver and defined attachment as a "lasting psychological connectedness between human beings." (Bowlby, 1973). Some authors have pointed out that such an innate need for attachment could also develop for the place where we were born and grew up (Fullilove, 1996). The place of nurturing as well as the attachment to the caregiver, have the biological function of protecting the child, but also the psychological function of providing a sense of security. The house and the person become a safe base (Ainsworth, 1989) from which to leave to explore the world around and return in case of difficulty. It, therefore, provides security and protection both physical (the brick house itself) and psychological (a sense of belonging and unconditional acceptance), which are necessary for the development of identity and personality, as well as for optimal functioning and mental health (Fullilove, 1996). Anthony Wallace, an anthropologist who studied how people face natural disasters, pointed out that those who lose their homes and their community lose their cognitive map (i.e., their gestalt) of their environment; without that map, they have no sense of how to move through and behave as paralyzed (Wallace, 1957). An earthquake and the consequent necessary displacement breaks all the physical and emotional relationships, leading the person to experience the mourning phase, as the usual response to the loss of something significant

In his diary, a psychologist who helped during an earthquake in central Italy in 2016, well describes the meaning of displacement: "On August 26, 2016, at 9.00 a.m., two days after the mainshock, I arrived in Accumoli, the epicenter of the central Italy earthquake, engaged as a psychologist by a humanitarian organization. The first thing that just jumped out at me was the tent camp in the village sports field,  set up by National Protezione Civile.  First, I did a reconnaissance of the tent camp area with a volunteer of Protezione Civile; it was possible to see a big movement of people. My attention was captured by some cages, placed behind the bathroom containers, which housed chickens. The volunteer of the Protezione Civile told me that the animals had been taken from some farmyards in the village and put nearby the tents of the elderly who would have consolation in taking care of them" (G. Psychologist Volunteer- Earthquake Centre Italy)[3]

How is the post-earthquake phase seen through the eyes of an adolescent? During earthquakes, adolescents, like everyone else, witness death and suffering, but they may be more vulnerable than the others (Ekşi et al., 2007). Fifteen years old adolescents victims of an earthquake were found to present greater vulnerability to symptoms such as depression, anxiety, and suicidal ideation even after years (Shi et al., 2016; Tanaka et al., 2016). Post-traumatic stress disorder (PTSD) is often found in young earthquake survivors (Dell' Osso et al., 2011; Pollice et al., 2012). For example, when an earthquake suddenly occurred in Turkey at 03:00 a.m. on August 17, 1999, adolescents (mostly males) participated in relief operations. In this way, they witnessed death and suffering in their home or neighbors' houses. Having witnessed death themselves is one of the main factors for developing PTSD in adolescents (Ekşi et al., 2007; Pfefferbaum, 1997). Indirect suffering can also be harmful. For example, in the Turkish earthquake of August 17, 1999, about one-third of children reported that parents and other adults showed extreme reactions during and after the earthquake, and this was a significant risk factor for the development of PTSD (Ekşi et al., 2007). Parents had become self-absorbed, crying, moaning, or praying out loud, and these reactions probably increased the children's feelings of insecurity, fear, helplessness, and anxiety. Of course, children and their parents respond to each other's stress, but parents should serve as role models for dealing with the situation (Asarnow et al., 1999). Events that are not initially perceived as threatening may become so after observing parents' panic reactions (Marin et al., 2020). In another study on Turkish children who survived the earthquake, it was found that the negative effects were more pronounced when their fathers became irritable and detached (Kiliç et al., 2003). Thus, the family's ability to remain calm and reassuring can be a critical factor in preventing PTSD in adolescents.

These chronic factors can severely compromise crisis management and put the elderly at high risk of being emotionally overwhelmed due to a destructive event.

Do older people recover faster or slower? There is not a consensus on this issue. Sometimes a faster recovery is found (Bolin, 1985) in the elderly. Buckle (Buckle, 1998) stated 'There is anecdotal evidence – though not corroborated by any systematic study – that the elderly who had weathered the landmark disruptions of war and economic depression or the more personal difficulties of daily domestic life dealt with the stress of living without gas better than the less robust young. Being personally more resilient, they were more imaginative in the solutions they developed to cope without gas'.  Some data show that having experienced an earthquake has improved social relations in affected communities compared to the general population (Ardalan et al., 2011).

The inability to ask for help. A common difficulty among the elderly is the inability to ask for help, even when the older individuals need economic and emotional assistance. The elderly tend to make fewer requests to help services than other population groups during emergencies (Poulshock & Cohen, 1975). According to the Australian psychiatrist Beverly Raphael, in the elderly, "the emotional trauma acts in-depth, but they tend to suffer quietly" by giving up asking (Raphael, 1986).

The greater physical and psychological suffering. Older adults' physical health and psychosocial well-being are often impaired by earthquakes (Mecocci et al., 2000). For example, after an earthquake that hit two central Italy regions (Marche and Umbria), on September 26, 1997, 47.9% of the affected had been displaced and lived in temporary housing modules. This subgroup of displaced people suffered most frequently from hypertension and had a higher comorbidity score measured by the Cumulative Illness Rating Scale (CIRS) than people who stayed at home (Mecocci et al., 2000). People accommodated in temporary housing modules showed a higher score on the Geriatric Depression Scale and Hamilton Scale for anxiety and often complained of poor health, rated as low self-perception of the well-being. All the subjects in the sample suffered from the discomforts caused by the earthquake. However, the precariousness of living in temporary houses, whose structural characteristics do not consider the needs of the elderly, could justify the more significant discomfort experienced by this subgroup of the population (Mecocci et al., 2000).

A complicated mourning. In earthquake situations, people are faced with a "complicated mourning," which could be called "prolonged grief disorder". Sigmund Freud addressed the theme of mourning in his book "Trauer und Melancholie" [Mourning and Melancholia] (1917), conceptualizing it as a process that leads to the processing of the loss of the object. Usually, the object is a person, but in earthquakes, we see multiple mournings, not just people are lost but homes, places, spaces of socialization, habits, and pieces of community identity. Overcoming mourning is possible, but it turns out to be more tortuous when, using a spatial metaphor, what we have behind our backs is significantly richer than what we can have in front of us in terms of possibilities to build, invest and change. The elaboration of complicated mournings would need a long-term perspective that unfortunately lacks in an age group that sees its time resources limited.

In conclusion, it is crucial to have a high level of distinguished preparedness in the pre-disaster phase, which considers the different needs of each possible segment of the exposed population to better respond to the emergency in the post-disaster phase. For example, It is well known that the elderly spend much more time at home than elsewhere; moreover, it is known that the home is the most critical place for the elderly, the place where they feel independent and safe (Fänge & Ivanoff, 2009). So it is essential to ensure that older people are adequately prepared so that they are not the most vulnerable in this context.

Raphael, B. (1986). When Disaster Strikes: How Individuals and Communities Cope with Catastrophe. Basic Books. https://books.google.it/books?id=dfJpmwEACAAJ