Citizen Initiatives around the world - Supporting people during Covid-19 pandemic

COVID-19 has brought truly unprecedented times that no one could foresee. Overnight, the world as we knew it, changed! As the coronavirus started to spread and jump, many who were travelling abroad quickly reshuffled their plans to return home to family members and loved ones. 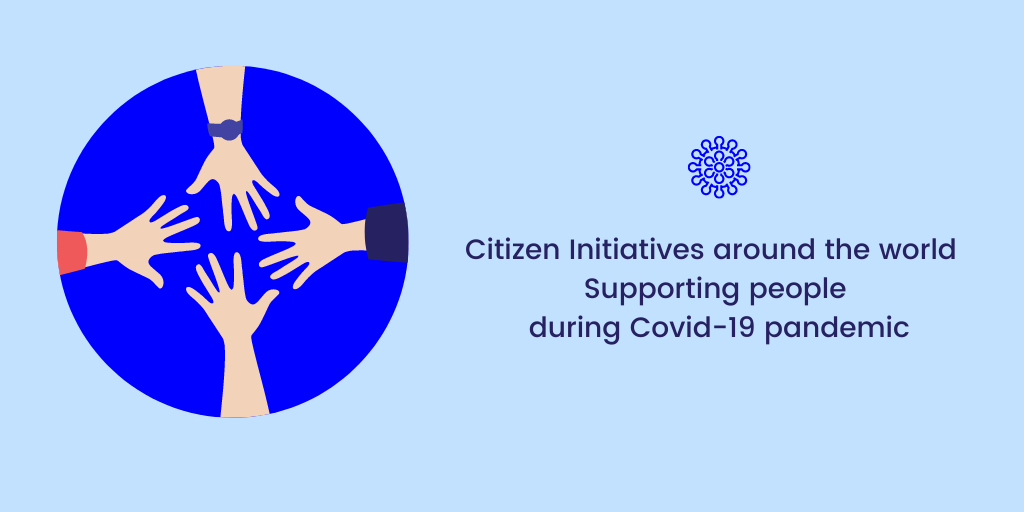 Amongst fear, uncertainty, and changing information, there are many inspiring stories of everyday people “our heroes” who rebuilt some faith in humanity! Those heroes responded to the crisis with their kindness giving love and saving the lives of vulnerable people and had to also stay in quarantine.

This article will feature inspiring stories from different countries in Europe but also beyond to show the human face of this pandemic.

Belgium, a country with a quite high number of foreigners, responded to the coronavirus emergency with different local initiatives organised spontaneously by citizens. The initiative Covid- solidarity engaged neighbours with elderly or isolated people who could carry out basic shopping and ensure delivery to their residencies. During the quarantine, 7000 registered volunteers gave assistance to 800 people giving a strong message of solidarity.

Also, volunteers launched in Brussels an application, called LinkUp operation to provide second-hand tables and furniture to the large hospitals and various residences for the elderly people.

In Norway, citizens impulsively used an existing platform to post ads for free and offer assistance to people in quarantine, like buying groceries, walking dogs, or entertaining children with puppet shows. Originally it is an advertisement platform, however, during the quarantine time, its purpose was changed to promote solidarity and unanimity.

In Spain, the country that was one of the most severely hit by this global crisis, private creativity and motivation flourished as a response to the increasing needs. This was the case of Francesco Torrado and other 100 citizens who joined a local civil initiative which aimed to produce surgical masks and homemade gloves. Within a few days, 5000 masks were produced and with the support of the local police, this medical supplies got delivered to the nearest hospitals and clinics to doctors and nurses who were struggling to handle the crisis due to the insufficient medical equipment.

In the past months, we watched in our screens a beautiful action from musicians who warm up the atmosphere with their melody. Also, we saw people in quarantine singing to their balconies, windows, and rooftops, applauding and showing gratitude to their health-care workers and playing music. This is the case of Adam from Hungary, a young musician, who played music from his balcony in the city centre to cheer up his confined neighbours. Similar private concerts were also organised in different European cities.

Beyond the European borders, other civil initiatives were springing up around the world. In Iran, civil society groups are filling in the gap of the state. The ‘breathing campaign’ (Campaign Nafas) is one of them. Despite bureaucratic restrictions, the campaign managed to import over half a million N-95 respirator masks from China as well as it is producing its own protective equipment in Tehran and Yazd. In Tunisia, a great number of people joined a Facebook group which connects volunteers to help fight the pandemic in different ways; raising money, collecting medical supplies, disinfecting public spaces, and working with regional authorities to identify families with urgent financial needs.

Global movements such as Give a Day connected citizens with isolated people who needed assistance. Based on the request, the platform links COVID-19 neighbour with the people paying a special attention to their privacy.

According to WHO statistics, with 14,562,550 confirmed cases and hundreds of thousands of deaths, we know that this crisis is not over yet! But all these citizen initiatives give hope and trust to people and offer an opportunity to rethink our societal values and principles.