Social media influencers – can they increase awareness of a crisis?

People receive and share information with other like-minded individuals. They do it intentionally and with the encouragement of technology, like search engines and cookies. Some even claim, that we live in “information bubbles”. 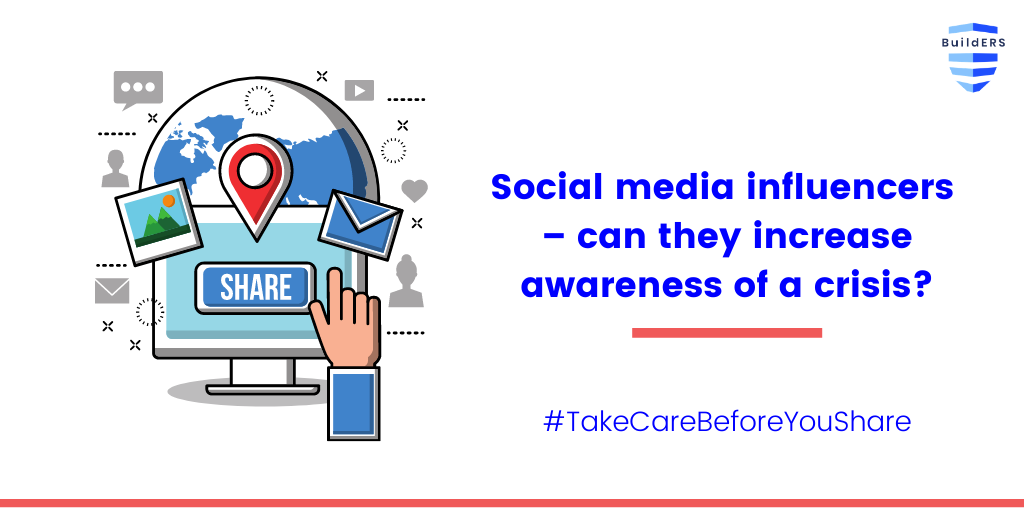 At a time when COVID-19 pandemic was rapidly escalating, BuildERS project held three online tabletop exercises with the Estonian, Finnish and German crisis management experts and communication specialists. Participants worked at the public, private and non-profit sectors and represented both junior and senior level positions. One of the phenomena discussed was the role of social media influencers. We enquired the participants’ opinions of influencers as crisis related content producers.

Influencers may have large built-in audiences and may act as sources of information. They produce videos, blogs, photos and play live games on the internet.  For instance in Finland, awarded YouTube influencer Roni Back has more than 500 000 followers and his most popular Finnish language videos have been viewed 1,5 million times (compare to the population of Finland, which is 5,5 million).

On the 29th of January Roni Back uploaded a video targeted at children and youth called “what is the corona virus and should we be worried” on his channel. Currently this video has been viewed roughly 300 000 times. A week after he made an update, where he emphasised the challenge of providing up-to-date information about a fast developing crisis and was amazed of the wild conspiracy theories and hate speech spread on social media. On his third video blog, he organizes a spontaneous volunteer event of delivering groceries to families. Later in March Roni Back managed to interview the Minister of Education and medical doctors about guidance for the young in a very relaxed manner. This video has had an audience of 100 000 viewers on the same day.

Influencers like Roni stay humorous even when they talk about serious issues. Another influencer, actor and celebrity Antti Holma made a video of the official coronavirus information; humour is embedded in the everyday-life visuals and ASMR voices (e.g. of tapping a thermometer or running water while washing hands to create a calming sensory experience), but the message itself is serious. The aim is to relieve stress and not to make light of the situation.

Although the influencers may participate in volunteer awareness raising and advocacy, full time influencers are usually entrepreneurs, whose income is dependent on advertising revenue. YouTube protects its advertisers and may automatically remove advertisements from videos, which relate to global disasters and crisis. Thus, influencers have to keep the focus on entertaining attention-grabbing content. Often the means for this are provocation and providing surprise. Being too educational (read boring) or denoting too much channel time for authorities’ messages can be a financial and social catastrophe for the influencer. Likewise, an influencer cannot be too strong of a business brand advocate without losing credibility and appeal.

COVID-19 pandemic has inspired also less socially responsible influencers. One example is a coronavirus challenge with its many varieties. Several social media influencers have posted videos of themselves licking a toilet bowl on the video-sharing platform TikTok thus taking a risk of getting a virus-infection. Somehave risked others by licking items in supermarkets. These kind of (criminal) pranksters are popular especially among the youth, who may try to take the challenge themselves as well. The adults will learn about these kinds of influencers’ actions in conventional media, if they make the news headlines.

BuildERS project’s tabletop exercise participants considered social media influencers as a double-edged sword. They can be of great help in cases where they are responsible and spread accurate information. Yet, it was deemed difficult to spread serious messages through influencers. Often there is no way to discern, what information is valid and verified and what is not. Information originating from authorities or other trusted sources should be recognizable. Influencers may not have comprehensive situation awareness, if they do not actively work together with the experts. One respondent would prefer people use authorities’ official social media channels and websites for information sharing.  Overall, participants believed that the role of influencers will increase in the future. Thus, we will need creative working models, training and guidelines to guarantee responsible risk and crisis communication.