Events like the COVID-19 pandemic or the cyclone Amphan hitting India and Bangladesh in May 2020, as the most recent extreme weather events, regularly spur a discussion which revolves around the terms vulnerability, risk groups and resilience. The research project BuildERS took up this debate, since it aims to increase the resilience of European communities. 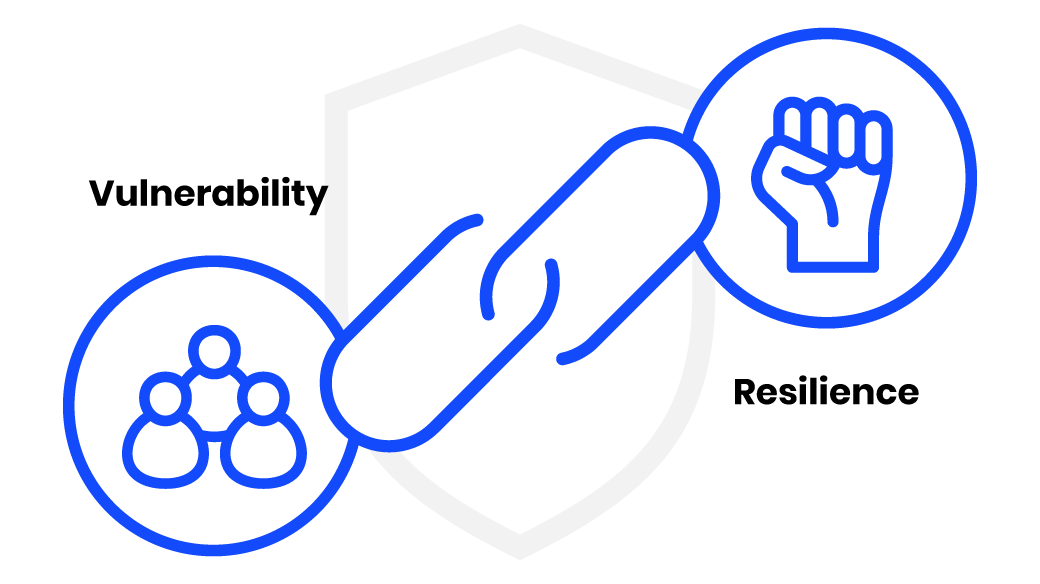 But what does resilience actually mean and how is it linked to vulnerability? While there is no consensually agreed upon definition of resilience across policy fields, let alone academic disciplines, most definitions share the assumption that resilience is in one way or another linked to capacities and rests upon adaptability or even absorbance and resistance in the face of shocks. As such, resilience is intimately linked to vulnerability. Yet, their relationship is not as simple as a zero-sum game, in which less vulnerability generally means more resilience. Rather, we need to consider both concepts in their particular contexts. Therefore, this contribution takes a closer look on both concepts, outlines their role within the BuildERS project and reflects on how the deployment of these concepts can contribute to increasing the protection of people.

Vulnerability and resilience are core concepts within the research agenda of the BuildERS project. Since vulnerability of societal groups was the starting point for our research, we turn first to this concept. According to disaster research, disasters and crisis are the result of the interplay of extreme events and vulnerable societies. Extreme events are based on stressors and encompass earthquakes, flooding, storms as well as chemical spills, nuclear breakdown or blackouts. All these events are based on stressors exceeding the scope of what is societally considered to be normal. When events like this happen, it very much depends on the affected population or region, or more generally speaking, the affected society, if and which consequences (for instance damages to infrastructure and live) these events trigger. Consequently, an event is not a disaster in and of itself. Yet, it becomes a disaster, if the particular event exceeds the coping capacities of a society – i.e., if a society does not maintain its daily routines, practices and standards. This social side of disasters is represented in the concepts of vulnerability, which can broadly be defined as the susceptibility of an entity (persons, infrastructure or society) to harm. Therefore, whether an extreme event will become a disaster or have disastrous consequences depends on the vulnerability of the affected societal entity. In that reading, the scope of a disaster depends on the societal conditions and structures an unusual event hit.

Against this backdrop, if an entity is considered vulnerable depends on a multitude of different factors as well as their interaction with one another. Individual features, resources and characteristics such as age, gender, race, (dis-)abilities, income, education, previous experiences, social networks and societal status influence vulnerability. This does not mean that these dimensions would lead directly to vulnerability. What it means is that they mutually interact, relate with other factors and, finally, the event itself. For instance, features such as age, availability of support services like guidance systems, support by other persons or the financial situation of the affected person interact with each other and might render a physically impaired with a strong social context less vulnerable than a person less vulnerable than it might seem from just one perspective. At the same time, these interactions can lead to a higher risk of being vulnerable. Furthermore, these individual features are influenced by social structures. Societal power hierarchies, discrimination, the existence of social support services or the extent to which needs are considered in disaster management structures have strong effects on the vulnerability of people. This brings us to two more important aspects of vulnerability. First, vulnerability is dependent on the event that takes place. Flooding affects those living on higher ground less than those living in valleys near rivers. Second, vulnerabilities might change over time. The longer an extreme event is taking place, the more groups that once were able to deal with an event become vulnerable; for instance, due to decreasing availability of medication. The current COVID-19 pandemic with its long-lasting lockdowns and infrastructural consequences is the most recent example.

The second important concept is resilience. Resilience broadly speaking represents the ability of an entity to deal with stressors such as extreme events. While vulnerability in this vein might be considered as the perspective on an entity’s susceptibilities to harm, resilience is the capacity of this entity to overcome stressful events and disasters if they happen. Against this backdrop, the acknowledgement of resilience implies an acceptance that disasters do exist. However, building resilience must not reduce the attempts to mitigate risks, such as climate change, and its link to an increase in extreme weather events. On the level on the United Nations, the Sendai Framework for Disaster Risk Reduction mirrors this understanding of the importance of both, building resilience while mitigating risks. Accordingly, resilience is a societal task rather than an individual responsibility. Different societal scales, ranging from the individual to the whole society, are mutually interlinked. It is thus necessary to scrutinise those societal structures which allow individuals and groups to become resilient. Rather than reducing state efforts on disaster management, resilience should promote existing capacities as well as enable individuals to develop them. Building resilience requires a lot of societal engagement, including the provision of redundancies and support structures. Thus, resilience cannot simply be imposed on individuals or demanded by the civil society. The problematic call for resilient societies should thus be substituted by a debate on what capacities are to be granted to provide the resources in daily life that are necessary to react, when needed.

For the BuildERS project, the complexity of vulnerability as well as that of resilience are equally important and challenging. It is important, as BuildERS takes a closer look at those people and living situations that are most at risk in extreme events due to recent studies. These include elderly persons, persons with disabilities, homeless people or people living in poverty. But it is also important to scrutinise these current vulnerabilities and ask for ways to reduce or even prevent them. In order to develop measures to decrease vulnerabilities and increase resilience, it is important to understand why they become vulnerable in the first place and which capacities they could unlock if the right support would be given. The complexity of vulnerability and resilience is challenging at the same time, as it requires an equally complex operationalisation and research to make the factors and features as well as their interaction visible and addressable. In order to achieve this, BuildERS not only involves a variety of actors and stakeholders but also aims at including those who were previously (or due to the Covid-19 pandemic also currently) most at risk. Making their voices heard is most important to find appropriate measures to improve precarious living situations, build capacities and increase resilience – for the whole society.